It’s been two months since my French Bulldog had IVDD surgery for grade 5 IVDD with no DPS and this is our recovery story. 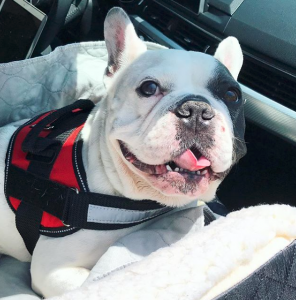 Albus’ second month of IVDD recovery has been pretty similar to his first, in that he still does not have bladder control, bowel control and nor can he walk. However, we have also gotten more used to our new normal and though it still isn’t easy, it’s true that with a little time, everything gets a little easier.

This is life now and instead of wallowing in the could-have or should-have been’s, we’re going to embrace it and do our best every day.

This month we celebrated some major victories. They might sound small but these are huge steps in the right direction for us and we couldn’t be happier.

He has started pulling in his hind legs when being picked up. When he first came home, his legs were limp as noodles so this is a great sign!

He also pushed up from his back feet for the first time. We weren’t sure if he could do this because he had been doing a lot of handstands which makes it seem as though they’re standing when really they’re not and all their weight is on their front half. But one day at therapy when he was laying down, he pushed up just his back feet which is a great sign. 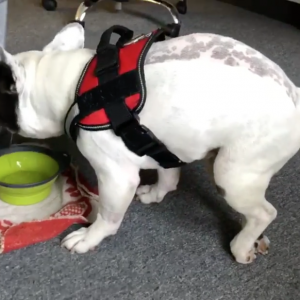 On May 12th, Albus peed by himself! This is probably what we’ve been most excited about. I tried to get him interested in marketing his territory, hoping this would inspire him to go to the bathroom and low and behold, it did!

I took him to a bush, he smelled around and then I noticed him turning sideways like he was trying to “mark it”! Then he started peeing some. Honestly he probably would’ve peed more but I was so excited I screamed and the neighbors asked if I was alright and I said yes and we all celebrated.

It’s the little things. We were so happy to see just this small bit of improvement. It’s these things that instill the fire in us again, that give us hope and keep us determined to do whatever we can to help him.

He has continued to pee, at least partially, on his own since then. We do help empty his bladder just to make sure it’s completely empty so that he doesn’t get a UTI but he will pee on his own anytime we take him outside near a tree or bush.

Of course, we have had our breakdowns. Sometimes Albus doesn’t behave, and because he comes almost everywhere with us, this can make things difficult. I remember on one particular occasion where he was acting crazy in his wagon and then puked all over the car and purse and it was just so miserable. But looking back at it now, I just laugh. What else you can you do?

We had his first re-check five weeks post OP and were thrilled to have the neurologist confirm that he has regained deep pain sensation. To test for this, the doctor uses something to pinch their toes and Albus was clearly very agitated signaling he could feel what the doctor was doing.

We have been continued to do his range of motion exercises, massages and using an electric toothbrush on his bottom feet to try to stimulate his nerves. 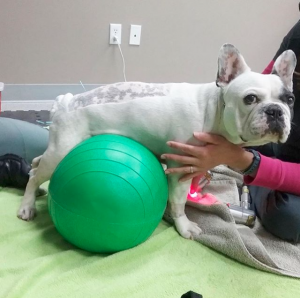 We were also given the all clear to begin some physical therapy so in addition to laser and acupuncture, Albus is doing balancing and standing exercises. He can stand for about 30 seconds by himself but he does fatigue pretty quickly.

We tried starting him in hydrotherapy but because he doesn’t have much use of his back legs, he just sort of floated there so we will pause this until he has a little more movement in his back legs.

He has stood a couple times unassisted, which is great news, and although he still knuckles some it’s still a step in the right direction for him to be initiating these stands.

All in all, we’re hanging in there. It’s not easy but it’s worth it and we have learned so much about resiliency, love and determination. We are reminded again to be patient and stay the course as with these spinal injuries, especially as severe as Albus’, it just takes time. 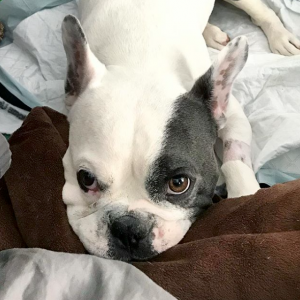